It's Not The Korova Milk Bar But... 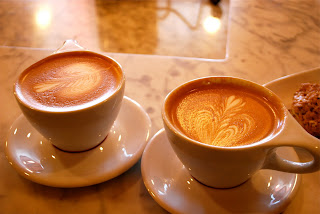 So, seeing as how I don't have my own personal nuclear power source at the moment, it's probably a good idea to head down to Venice for a recharge.

Intelligentsia Coffee on Abbot Kinney may not be The Korova Milk Bar from "Clockwork Orange." It doesn't serve vellocet, synthemesc or drenchrom (to the best of my knowledge) but the coffee this establishment serves does have "knives in it" so to speak and will certainly "sharpen you up" when the time comes.

Now where did I put my bowler hat and fake eye lash. Wouldn't want to go out under dressed.
Posted by Doselle Young at 3:57 PM No comments:

All The Beauty L.A. Has To Offer 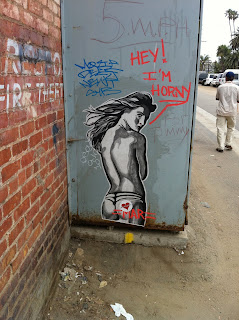 Let's just file this one under "All The Beauty L.A. Has To Offer".
Posted by Doselle Young at 3:33 PM No comments: 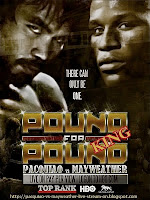 I'll be straight up and tell you that I don't give a crap about most sports.

The ones that I do like look as if they might have been invented in a prison yard and, while I've recently fallen in love with Aussie Rules Football my first love remains boxing.

What can I say? I like watching guys punch each other and if that makes me a caveman then so be it. Gimme a club and some bison to roast on a spit.
Sounds like good eatin'.

Now, for those of you not in the know, at present the marquee fight that all boxing fans want to see is between two current superstars in the sport: the ostentatious Michigan born Floyd 'Money' Mayweather and Filipino sensation Manny 'Pac Man' Pacquiao.
To put it in nerd terms: it's a lot like wanting to see who's faster, Superman or The Flash (The Flash) or who would win in a fight between the Silver Age Superman and Thor (The Silver Age Superman).

Well, its kind of like that except that Superman has raced not one but two Flashes and Superman and Thor may have squared off already bur given the superhero crowd scene orgy that was JLA/Avengers, I cannot actually recall off-hand and I'm too lazy to get up and thumb through the Absolute Edition sitting in my library somewhere between League of Extraordinary Gentleman and Absolute Planetary Vol. 1.
What I can tell you is that, at this point, pretty much any absurd cross continuity comic book throw down you can think of (Howard The Duck Versus The Dark Knight) is more likely to happen than Mayweather/Pacquiao.
So, why should you care, folks? I dunno.
I could mebbe give you some half-convincing argument about the importance of popular cultures, blah, blah, blah but the real reason you should care is that, if you really get off on thought about who would win in a fight between two superheroes then chances are high you would actually enjoy this fight quite a bit.

What I've found is that the buzz is much the same, but moreso because it's unscripted. In essence, it's more like being a man on the street when worlds collide and The Last Son of Krypton and The Scion of Asgard throw down. From that vantage point, there's no telling what's going to happen and there's a serious kick to that which a scripted four color comic just can't touch .
But it's not going to happen.
The fight has supposedly been half way negotiated, called off, renegotiated, come together and fallen apart more times than Pamela Anderson and Tommy Lee; everyone is trying to figure out why and the longer it goes on, the more it appears that the boisterous unbeaten Mayweather is simply too chicken to risk a loss on his record in favor an unblemished but, in the end, unremarkable record.
Oh sure, Floyd is fast (but nowhere near the speed of light and without the absolute control over his molecules that made Barry Allen such a formidable opponent) but Manny is just as fast if not faster and, unlike his opponent, actually has suffered the agony of defeat and come back stronger from it.

Not so Pretty Boy Floyd.

Now, as Mayweather continues to duck Pacquiao, one begins to wonder exactly what sort of legacy Mayweather will leave behind when time and old age finally force him to retire. I think it's possible we can already guess how sports history with view Mayweather as a Boxing Insider poll for 2009 Fighter of the Year has 91% of the vote for The Pac Man while only 5% of fans picked Mayweather.
Even though its highly unlikely Mayweather's PPV numbers will head south anytime soon, it's doubtful Mayweather will be able continue to convince anyone--including himself--of his own relevance in a sport is rapidly growing tired his inability to close the one deal that would allow him to prove--without a doubt--that he has a champion's heart to go along with a champion's pocket book.
So, for now, I guess if you want a good brawl, its back to the funny pages.

Posted by Doselle Young at 5:22 AM No comments:

To Boldly Go Where You Have Gone Before

In A Perfect World 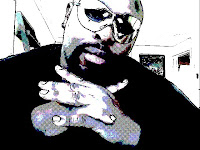 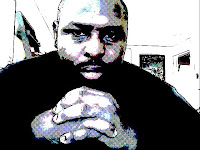 In a perfect world, I would would be a rock writer by day and a super villain by night.

I'd be a rock writer in order to combine two of my greatest loves in much the same way Reese's Peanut Butter Cup fans love the unholy union of chocolate and peanut butter. My desire to be a rock writer would combine my love of music and writing into an explosion of extreme awesomeness the likes of which the world could scarcely comprehend--or so I like to imagine, anyway. While it's a relative truism that the reality of achieving one's dream job rarely turns out to be as fulfilling as the dream, itself, I do believe it remains a dream worth the dreaming (apologies to both Kate Bush and Neil Gaiman, whom, I believe, actually was a rock writer at one point).
I'd be a super villain in order to both have the super powers I'd like and to work around the problem of disappointing people when I decided to use my phenomenal powers in a way they didn't approve of. As a super villain, I could do just about anything I'd like (including rescue kittens from trees) under the guise that my every action, no matter how benign it appeared, was actually part of some evil plan.
Kittens. A brand new Iphone. Giving away Hybrid cars to low income families. Creating a second string of mammoth islands in the north Atlantic Ocean to buffer the The Carribean Islands from force of the hurricanes that regular rip through that part of the world.

All part of some dastardly plan.

I bring this up because it's late and the coffee hasn't worn off and at this hour playing games of 'What If' are entirely too much fun.
Posted by Doselle Young at 4:17 AM 1 comment:

Hi There, Gorgeous! Oh, But Don't You Look Pretty Today

I want to talk about people for a moment. Home Sapiens. The people who live next door to you. The folks down the road. That mildly abrasive lady who mangles your mail when she shoves it a weeks worth into box too small to hold a piece of bread. Human beings. We, The People.
I love us. We ROCK!

Now with BP still crapping their pants and an idealistic American President who seems to be finding his power limited by a political system that seems to have given up on idealism right around the time the ink dried on Bill of Rights; with North Korea threatening a nuclear strike (like that's a good idea) and loads of people around the globe being generally shitty to one another every second of the day, it must seem a bit naive to take a moment here to celebrate the glory of the human animal--like choosing to praise the dog five minutes after he's shit the rug.

I'm going to do it though because as a Secular Humanist, I believe it's the right thing to do.

That homeless couple I happened upon late one night as they proceeded to fuck on a scrap of cardboard a little larger than a bath towel.
All beautiful.
We are beautiful.
In our rapture.
In our inventiveness.
In our sorrow.
Perhaps especially in our sorrow.
"Whoa! So, what's the deal, man?" you ask. "Don't tell me you started this freakin' blog just t0 bum me out with some shit about homeless people gettin' busy! I mean, I thought you wrote comic books or sumthin'! What about the kids?!?"
I do write comics.
I've worked on Superman, Wonder Woman, The Authority and a twelve issue series called The Monarchy all for DC Comics. I've written short comics stories for Vertigo including stories in Gangland, Heart Throbs and Strange Adventures. I also write science-fiction and have a prose story in The Darker Mask (Tor Book, 2008). There's a lot more on the way. I'm pounding out my first full length novel because there's no time like the present and I expect someone out there to keep me honest on finishing a draft before my birthday.
But being a genre writer (or any kind of writer, really), I think, should be about more than naked advertising and geekery (not that either is a crime in moderation). About something more than tooting your own horn and beating your own drum. Sure, I'll be the first to admit that shameless self-promotion looks damned good on some writers--and I've had the good fortune to know many--the majority of them much farther along in their careers and a great deal higher up the ladder of success.

It's the kind of thing that can make you wonder what, if anything, you have to say to add to the great dialogue. The kind of thing that can make you doubt the necessity of adding your own voice to the choir. To be honest, it's something I think about quite often these days but not because I'm afraid I have nothing to say but precisely because I do.
Loads.
There's a lot of struggle out there. Not just lately, but always. A lot of people lost in the woods and a lot of unexpected changes--the kind that require negotiating some pretty rough terrain, emotionally speaking. So, you know? I figure we could all use a little pep talk and a little understanding mixed in with the wink and the snark and the great grand show.
Hell, I know I could.
Now keep in mind, I'm not here to sell you a bill of goods.
I can't promise I'll be this earnest everyday.
In fact, I can pretty much guarantee that I won't.
But what I can guarantee is that I am genuinely more interested in just how amazing the rest of mankind is...how numinous experiences seem to wait around every corner...than I am in telling you how interesting I'd like you to think I am.
In other words: "Hi there, gorgeous! Oh, but don't you look pretty today!"
Posted by Doselle Young at 1:04 AM 1 comment: